A terribly exciting find just figuratively landed in my lap, or rather my mom’s lap and as we are social distancing was transferred to my lap via cell phone photos. For now, I’ll take it!

As she was looking through my dad’s collection of old books, she opened one and found something interesting…

Mom: “Was there an Ella R. Frederick on Daddy’s family tree?”

Me: “Yes! That was Grampy’s (my name for my paternal grandfather) grandma, Ella Frederick (pre-marriage name = Ella Kerr Robertson), so Daddy’s great-grandmother.”

The inscription inside the book is why she asked: 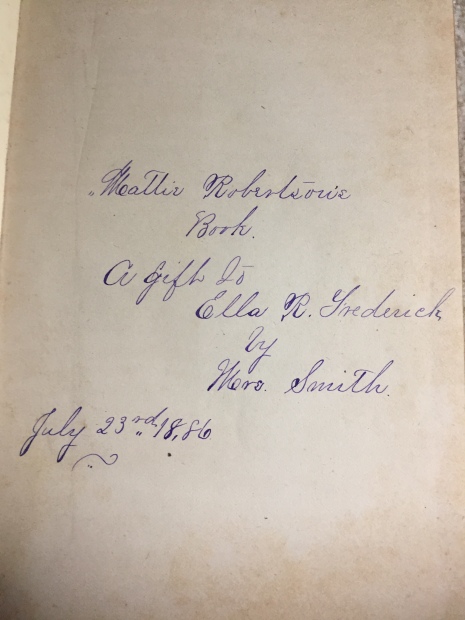 It appears to say:

A Gift To Ella R. Frederick

*The handwriting makes the word particularly hard to decipher, but I’m going with Mattie, a popular nickname of the time for Martha, or perhaps Matilda or Matthew. I polled Twitter and most agreed with Mattie, though Mattis, Hattie, and Heather were thrown around (not literally – no Heathers were harmed during the making of this post).

1886 would have made Ella, my 2nd great grandmother, 33 years old. I am unsure who Mattie Robertson could be, though a possibility is her father’s sister Martha Robertson who died in 1853. Mrs. Smith is also a mystery as there are no Smiths in this family that I know of yet.

It’s pretty amazing to me how old this book was. Here is the book, Cowper’s Poëtical Works by William Cowper:

William Cowper (1731-1800) was an English-born poet who also wrote hymns. He was religious and adamantly anti-slavery. One of his poems, The Negro’s Complaint, was told from the viewpoint of a slave and was quoted later by civil rights activist Martin Luther King Jr. It’s a gorgeous poem and I especially feel like quoting it now while photos and videos of a reckless white cop kneeling on the neck of black George Floyd, who later died from his injuries, have incited #blacklivesmatter protests, riots, and marches throughout the country.

William Cowper was pretty on brand for this side of the family. Everyone has villains lurking in their family trees, but I have yet to find a slave owner in mine and for that my soul breaths a sigh of relief.

Also inside the book were these treasures: 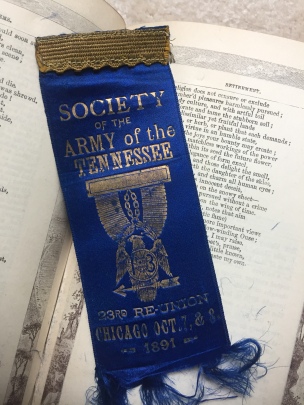 I am uncertain what the “Republican Mass Meeting * Sergeant at Arms” ribbon refers to, but the Society of the Army of the Tennessee was a Union army in the (American) Civil War, named after the Tennessee River. This ribbon states it was from their 23rd reunion, held in Chicago on October 7 and 8, 1891. Listed in the summary of the reunion was a Major W.S. Robertson, but I can’t find anyone in my tree who matches these initials, if he was even the one who attended. Much of the ceremony seemed to have been dedicated to the memory of General William Tecumseh Sherman, one of the generals in command of this particular army, and, of course, Taps were played.

I will leave you with the first, fourth, and fifth stanzas of Cowper’s The Negro’s Complaint because they are extraordinary and especially poignant right now:

Forc’d from home, and all its pleasures,
Afric’s coast I left forlorn;
To increase a stranger’s treasures,
O’er the raging billows borne.
Men from England bought and sold me,
Paid my price in paltry gold;
But, though theirs they have enroll’d me,
Minds are never to be sold.

Is there, as ye sometimes tell us,
Is there one who reigns on high?
Has he bid you buy and sell us,
Speaking from his throne the sky?
Ask him, if your knotted scourges,
Matches, blood-extorting screws,
Are the means that duty urges
Agents of his will to use?

Hark! He answers!—Wild tornadoes,
Strewing yonder sea with wrecks;
Wasting towns, plantations, meadows,
Are the voice with which he speaks.
He, foreseeing what vexations
Afric’s sons should undergo,
Fix’d their tyrants’ habitations
Where his whirlwinds answer—No

9 thoughts on “Treasure Found in Books: My 2nd Great Grandmother and the Poet” 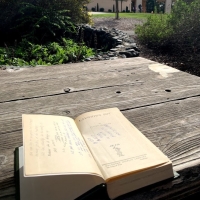 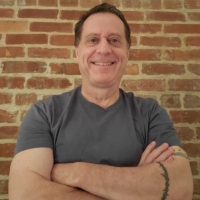